On Sunday, Tinubu unveiled his running mate during a visit to President Muhammadu Buhari in Daura, Katsina State. 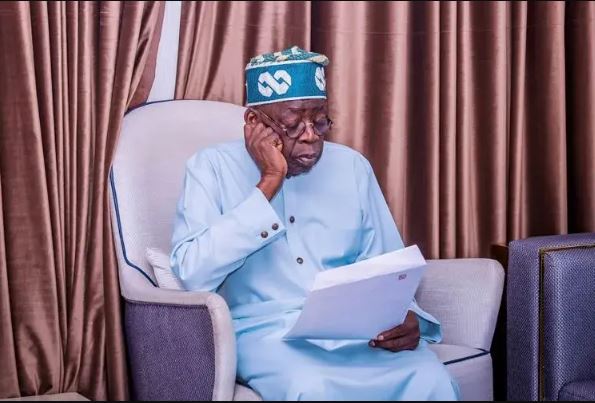 According to a report by Daily Trust, the panel which was set up to assist the presidential candidate of the All Progressives Congress (APC), Asiwaju Bola Ahmed Tinubu, in picking a running mate recommended 10 persons, aside from Senator Kashim Shettima.

On Sunday, Tinubu unveiled his running mate during a visit to President Muhammadu Buhari in Daura, Katsina State.

Tinubu had said he consulted widely on the issue of running mate and he appreciated the perspectives of leading members of the party, political allies and key national figures.

A dependable source in the ruling party disclosed to Daily Trust that the panel headed by Babachir Lawal, former Secretary to the Government of the Federation, analysed the strengths and weaknesses of 11 persons recommended.

The recommendation was contained in a report of a sub-committee chaired by Senator Grace Folasade Bent sighted by one of our reporters.

Members of the Lawal committee told this paper that the final report of the committee was concluded on Tuesday last week and submitted to Tinubu by Lawal, who travelled to London on Wednesday for the purpose.

One of the members of the panel known as Planning and Strategy Committee of the Tinubu Campaign Organisation (TCO), said a soft copy of the recommendation was sent to Tinubu before Lawal met him in the UK.

Those recommended were former Speaker of the House of Representatives, Yakubu Dogara; Deputy Secretary-General of the United Nations, Amina J. Mohammed; Kashim Imam, an associate of Tinubu.

The panel did not recommend any person from the North Central.

Panel members said the North Central was not considered because the National Chairman of the party, Senator Abdullahi Adamu, hails from Nasarawa State in the geopolitical zone.